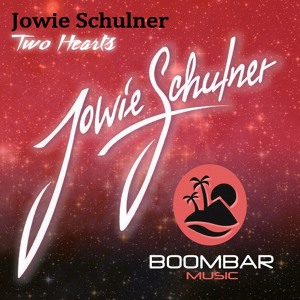 
Info: Do you love synthy , 80’s, melodic and euphoric sounds? Well, this Two Hearts EP is all about that. Jowie Schulner, known for his soaring leads and singing melodies is finally about to release Two Hearts. The german duo called Final DJs provides their Nu-Disco remix which is more mixfriendly for DJs. This is just only the beginning while Jowie Schulner working on his Debute artist album.

Original is written and composed by Jowie Schulner Remixed by: Final DJs

Jowie Shulner is one of the true reanaissance men of the 80s inspired synth scene. This illustrious producer released quality music across numerous genres and also runs the Boombar Music label. This man has been one of the staples of the scene for years, and when he's deemed one of his tracks 'complete' and ready for mass consumption it's a very special day indeed.

This day isn't today though, we'll have to wait a couple of weeks before we're given the full experience, however the prerelease on soundcloud is very, very encouraging as to the quality we should expect. Two Hearts promises to be a special 80s inspired synth experience par excellence.

I'm going to call this style 80s synth music Synth Romance. There is a special quality associated with this style, you can hear and you can feel it. Like in LA Dreams 84 Crush, MPM's Secret Fantasy, Tommy & Perturbator's Night Vibes, Lovinsky's Dreamcatcher and even in StardonE's Space Romance (amongst many other tracks) theres an element of exuberant emotional love.

I'm not talking about sexxxy Synth Erotica here, but real first love, true love, innocent love. The elements that make this so beautiful are delicately woven through Two Hearts. The pace is driving and exciting and the promise of a touch of her hand and the thought of her kiss prove to cause the electricity to charge and course throughout our very being. It's the anthem to the first smile you see, the first glance in your direction across a crowded room. The first time you hold her close.

It's this that makes Synth Romance such a powerful sub genre of 80s synth music and it's something that I hear every time I listen to Two Hearts. Like many experiences like this, it is fleeting, the track just hits home and sets fire to our hearts and then it's fading away, winking ever so cheekily in our direction that we're going to be getting more exciting experiences, but we have to wait until the 20th of August until we can feel the full crush force.

But the time will defintely make the heart grow fonder as we're also in for a Final DJ's remix of Two Hearts included in this release, which definitely raises my excitement level to fever pitch. Make sure you preorder your personal lovel letter from Jowie Schulner by clicking here, and give this worthy artist lots of love and support on his soundcloud here.

You never know what Jowie might share with us next, I personally am hoping for a full version of Friends Forever to surface one day, as this is one absolutely stunning pieces of superlative 80s synth love. This production cries out through the ages to be completed and released. We can but hope!

Jowie Schulner, head honcho over at Boombar Music, this week released a brand new single,Two Hearts. Having dipped his toes in the waters of Euphoric Track in recent months, Two Hearts sees Jowie back in the SynthWave saddle, but bringing a little of the euphoria with him.
It;s all sparking melodies and soaring synth leads in Two Hearts. Carried along on a rapid fire arpeggiated bassline Jowie brings together the best of his two sides evocative, nostalgic synth sounds and uplifting sunrise dance music. Two Hearts is pure bliss in synthesizer form, with a melody that will get under your skin. reMix duties are covered by Germany’s top duo,Final DJs who bring some smooth Disco tinged SynthWave to the tune, upping the stakes with their feel-good dancefloor magic and shining lead lines. Two tracks guaranteed to rock any party.

Oh man, it's just too good! So sweet and warm. Melancholy and melodic. We're talking about Jowie Schulner's newest single "Two Hearts", of course, which you'll find below ready and waiting to get romantic with your ears. And you'll do well to let it do just that! This tune is top level stuff, twinkling along on gorgeous 80's inspired synths and beats that leave you flying just a little bit higher than before. Total love.